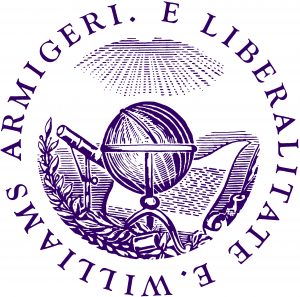 Apparently busy with other concerns, the College’s Trustees adopted the seal of the former Williamstown Free School upon incorporation of Williams College in 1793.  The Free School seal pictured three students with books in their hands standing before their instructor who was seated in a chair.  Encircling the device was the legend: E Liberalitate E. Williams Armigeri, “Through the generosity of E. Williams, Esquire.”  In 1802, the Trustees voted to procure a new seal, but this seal, our current one, did not come into common usage until 1805.

Over the years, the new seal has been printed with many variations.  Retaining the original legend, it currently pictures a globe, a telescope, an inkstand and pen, a scroll, a spray of laurel, and a miscellaneous object, perhaps a book, all beneath the rays of the sun.  The objects in the seal are said to represent the four sciences of the Quadrivium: Geometry, Astronomy, Arithmetic and Music.  Laurel is generally regarded as a symbol of honor, victory and of excellence.  The rays of the sun are perhaps an allegorical reference to learning.