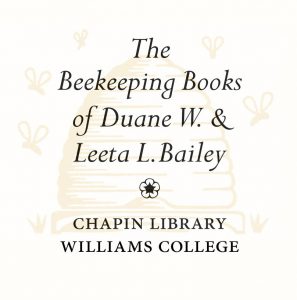 The importance of the bee to life on earth has long been recognized. Nearly 19,500 bee species have been counted worldwide, most of which do not produce honey but are crucial nonetheless as pollinators of flowering plants, including many food crops. Much attention is now being focused on bees, as entire colonies have disappeared and the possible causes of their deaths – viruses, pesticides, and genetically modified plants among them – are hotly debated. Bees have also long been a part of human culture, symbols of industriousness and loyalty, prized for their honey and wax. The domestication of wild bees (apiculture) has been practiced since the time of the Pharaohs in ancient Egypt, some fifty centuries ago.

The Chapin Library has a significant collection of books on bees and beekeeping, given to Williams College by Mrs. Leeta L. Bailey of Amherst, Mass., through the offices of her son, Duane A. Bailey of the Williams Computer Science Department. Numbering more than 200 volumes, the books were assembled by Mrs. Bailey’s late husband, Duane W. Bailey (1936–1998), a respected mathematician, professor, and coordinator of computer planning at Amherst College as well as a serious amateur beekeeper. Some of the books in the collection are practical manuals, while others are scientific treatises on bee biology and behavior. The earliest volume in the Bailey gift is from 1634 (Charles Butler’s famous Feminine Monarchie), the latest from 1998. This collection joins a number of classic apiculture texts already at the Chapin Library, beginning with the 1488 Dutch edition of Thomas de Cantimpre’s Bonum Universale de Apibus (Der bien boeck). Additions to the collection will be made as opportunity allows.

The Chapin Library’s books on bees and beekeeping can be searched in the Williams library catalog (local call number Bee Coll).